I kind of want to do a review of the 13″ Retina MacBook Pro I got a few weeks ago. But I want to do it in a way that doesn’t rehash what others have already written. Let’s see how this goes.

There are two aspects of computers that have really not improved over the past two decades: hard drive speeds and display densities. The hard drive problem has been ameliorated by SSDs so that really leaves only displays as the final piece that needs to play catch up. And catch up they have! But first things first.

Apple announced the 15″ Retina MacBook Pro models last summer. The announcement filled my heart with joy but I was also a little disappointed for two reasons. One, I’m not a fan of the 15″ form factor (it’s just too damn big). And two, the starting price of $2,200 was way above what I’d ever be willing to pay for a laptop.

When the 13″ Retina MacBook Pro was announced last November, one of those disappointments floated away. But I was still left with the prospect of paying $1700 for a new laptop. For the record, the most I’ve ever paid for a laptop (of any kind) was $1600 for a iBook back in late 2001. My normal laptop purchase M.O. is to get the lowest end 13″ or so model and do upgrades myself.

Recently the price for the 13″ retina dropped by $200. Also, it’s interesting to note that the educational discount on this model is $100. So, what that means is that one could get a 13″ Retina MacBook Pro for $1400 with an educational discount. It looks like the planets are aligning nicely!

So, after having had it for a few weeks I can safely say that this is by far the best laptop I have ever had. The screen still blows me away every day and the form factor is almost perfect. Let’s go over the highlights, shall we?

The display: oh my god the display

The star of the show really is the 13.3″ 2560 x 1600 IPS display. The size is the same as my old 13″ MacBook Pro but there are four times as many pixels and the color and viewing angles are significantly better. At normal viewing distances it’s nearly impossible to resolve individual pixels.

Here are some observations I’ve made over the past few weeks in no particular order.

There is really something strange about the retina display and I think I have figured out what it is: solid colors (like the solid white background of this page) seem to “disappear” because there is no pixel grain for your eyes to focus on. That is to say: with a normal low resolution display, solid blocks of color still have the grid inherent in the display technology as a thing that your eyes can focus on. With a retina display, there is just solid color and nothing else. This is not to say that the display is hard to focus on (quite the opposite), I’m just saying that there’s something strange about not being able to focus as easily on solid colors. 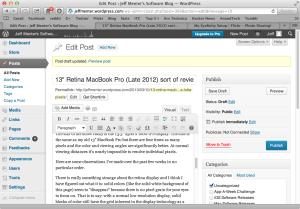 I thought that web browsing was going to be a painful experience (since the web is mostly not retina aware, i.e.; images and other in page UI elements will display at poor resolutions), but it has actually been pretty damn good. It helps that all text renders at high resolution. But many more sites are serving up high resolution assets than I thought would be the case. Just for example: I’m typing this into WordPress and most of the UI elements are being drawn in high resolution. Other sites like Facebook, Flickr, and Imgur are retina aware to a greater or lesser extent.

Apple has done a fantastic job of creating high resolution UI assets. All the normal buttons, sliders, widgets, etc. that you’ve grown to love over the years have been given a high resolution makeover and the results are just amazing.

Apps that don’t use the Cocoa frameworks directly display in the horrible “normal” resolution. This was clearly evident when I installed the Android Development Toolkit (which is based on Eclipse.) There is a fix though, and it’s as easy as modifying a value in the app’s plist. There’s a handy app that does this for you called Retinizer. 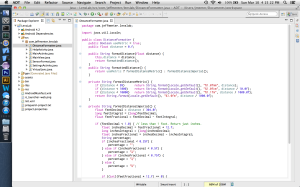 As much of a revelation as browsing and developing in Xcode was, I was totally unprepared for how amazing it was going to be to load up my photos in Aperture. Being able to view and work on photos on a display that is basically not having to do any kind of downsampling is just amazing. It’s like looking at an actual printed photo but so much better. It’s truly hard to get across to you how amazing it is. 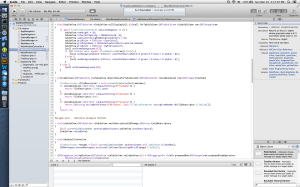 The way apple implemented HIDPI display scaling is pretty much mind blowing. In the displays settings panel, in addition to the “native” resolution of 1280 x 800, I can choose two scaled resolutions of 1440 x 900 and 1680 x 1050. What this does is create a virtual retina display at either 2880 x 1800 or 3300 x 2100 and scale those pixels to fit the display in real time. (It looks like it’s doing bilinear scaling which is perfect.) These alternate modes are very handy when running Xcode or tools like Photoshop or Illustrator.

Speaking of Illustrator: if you get a chance, totally run the retina aware version of Illustrator on a Mac with a retina display. It’s kind of like these two things were made for each other. If you run it at the HIDPI 1680 x 1050 you’re basically running Illustrator on a virtual 7 megapixel display. Holy cow! 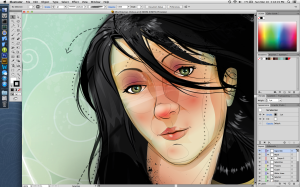 Being able to run multiple external displays is really kind of neat. And also makes my pile of Dell 20″ displays more useful. I’ve got a suspicion that it’s possible to run three displays in clamshell mode if two of them are DisplayPort but I haven’t yet been able to test this hypothesis. I would need either two Thunderbolt displays or two displays using active DisplayPort adapters + HDMI.

Thunderbolt is cool but for right now USB3 is where it’s at. Being able to buy a 2.5″ USB3 enclosure for $20 and slap an SSD in it and get most of the performance out of it over USB 3 is very handy. I’ve got my Aperture library on an external USB3 enclosure with a 250GB Samsung 840 drive in it. I get 200MB/sec reads and writes and random access is as speedy as you would expect. WIN! 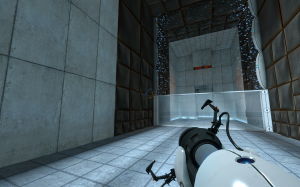 The Intel HD4000 graphics do fine at 2D and merely adequate at 3D. I play computer-based games mostly on my Windows machine but it’s fun to play some Portal occasionally at 2560 x 1600.

The battery life and i5 CPU are both fine. And boring.

The built-in 128GB SSD is quite speedy (we’re talking reads and writes at over 400MB/sec).

The machine boots up from cold boot to desktop in under 10 seconds. Yowzers!

The iPhone/iPad simulator in Xcode is retina aware so basically I can run a simulated retina iPad in landscape mode without any kind of scaling or clipping. Big win!

I don’t miss having an optical drive one little bit.

To sum up, this is just an amazing piece of technology. And it’s really only possible to do something like this when you have a single company that:

The two pieces of technology that have been lagging horribly over the past two decades—hard drives and displays—are finally becoming a thing of the past: SSDs are now mainstream and high resolution displays are not only affordable, they have been made immediately useful by being backed by excellent operating system software support.

PCs as we know them traditionally still have years of life left. I’m excited that these years are going to be spent with beautiful and functional displays.